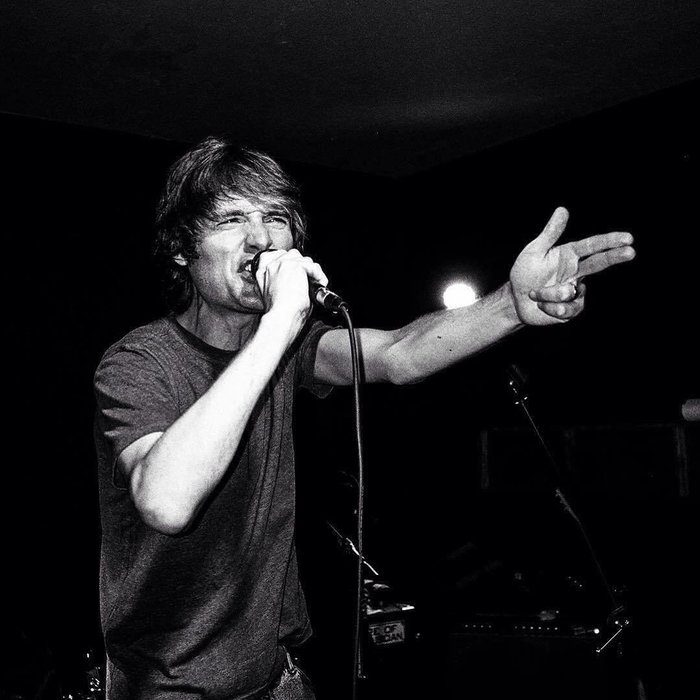 ‘On a bad day it’s a necessary exercise to bolster up & maintain my ego’s inappropriately fragile scaffold!’

Billy Cancel is a New York City based performance poet whose perfectly layered outpourings are like a million dollar birthday cake.  Cancel is s a genius and there are not enough superlatives which could accurately describe the mythical yet reality molded, Billy Cancel.

On paper, Billy sounds like the product of a worthy grant or a knowing Portlandia sketch. A British white male from Cornwall, doing urban performance poetry with a whiff of social commentary does seem a bit naff.

Yet, anyone who has seen Cancel on stage knows he is one of the brightest Cancel and striking contemporary performance poets out; consistently pushing the boundaries of his own unhinged, unique talents never referencing a direct scene or ‘slavishly’ paying homage to the past.

Similar to the chaotic city he inhabits there is great depth within Billy’s Ballardian work, and as a result there is much ‘experimentation, cross referencing, and no fear of failure.

Cancel performances are delivered in exhausting explosive expulsions, creating a cathartic experience for the audience involving guises, such as a face mask, creating ‘distance between the performer & the audience’ after discovering ‘having my regular face centering all of this was an unwanted reassurance offered up to the audience’.

‘Artistically I went from dossing in a vacuum to living in a vortex. New York is exhausting just in terms of getting by’

Performance poetry is a form shaped by John Cooper Clarke, Gil Scott-Heron and Linton Kwei Johnson, but not yet canonised as one of the major arts. Perhaps the most exciting thing about Cancel is how unclear his future is. Unlike Clarke or Ginsberg, he is playing not just with thoughts and verse, but the conventions of performance itself.

Another artistic outlet for Billy is his work in Tidal channel featuring his multi-talented wife, Genevieve Kammel Morris. Cancels explains how this is more of an ‘alliance’ than a ‘collaboration’ targeting the poems that they both think might work, resulting in art that is every bit as important, enjoyable and emphatic, as his solo work.

‘However, when everything syncs up we like to go strolling about the city, hit up some happy hours or some decent curry houses.’

I caught up with Billy to uncover the origins of his creativity; inspirations, ‘exhausting’ daily life in New York, and why people should drop in on his art. 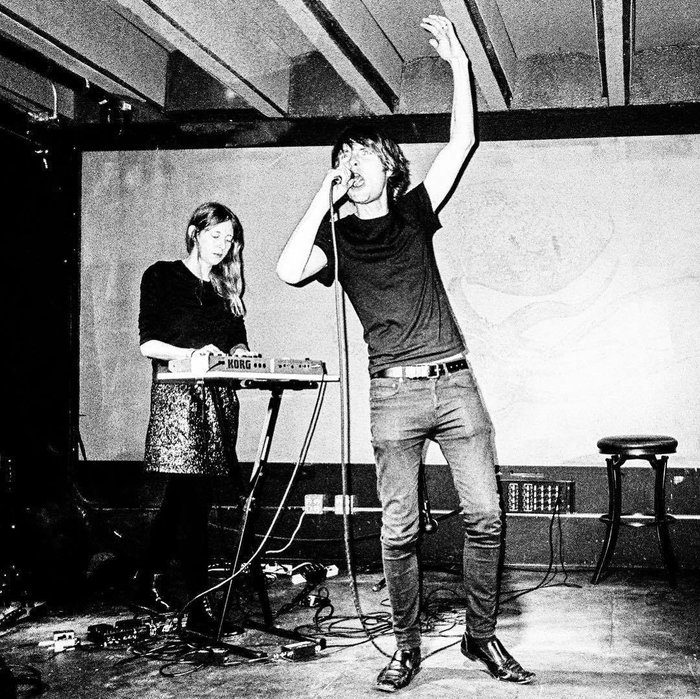 When did you begin writing poetry?
Early teens, I was tearing through a lot of books & music. I think most people have this phase then you get various opportunities to abandon the creative path just before you start making your own stuff or at a pretty early stage. Most people quit I guess, others gain momentum by their own fuel & for their own reasons.

At what time of the day do you feel most creative?
3am is best: all dream-stewed, with my energy & faculties untainted before the day sets up & plays out.  However, I always pick away at my notes at any spare moment, like on a bus, in a waiting room, custody suite etc. I think such donkey work seems to steal enough time back to tip the balance & bring up some zingers.

What inspires you to write poetry and be creative?
On a good day it’s a way to praise stuff I love, like a communion with things (art or otherwise) that inspire me. On a bad day it’s a necessary exercise to bolster up & maintain my ego’s inappropriately fragile scaffold! A lot of the time you’re just at the other parts of the process, the start is a very small pocket of time then after that you’re not always your own boss. 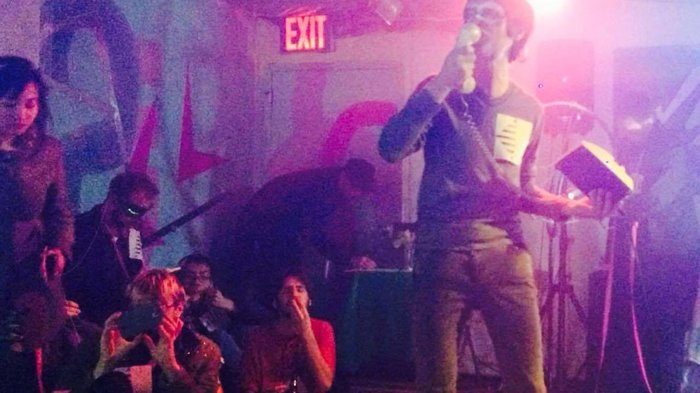 Your performance pieces often involve guises, why is that?
Well the poems are their own compact highly charged micro climates full of different voices & volatile movements. As a result, I found having my regular face centering all this was an unwanted reassurance being offered up to the audience. So for this purpose I use my guises to create distance between the performer & the audience, as much as quickly as I can.

How would you describe your live act, as a solo artist comparatively with tidal channel?So my live act is basically me trying to best fulfill the requirements of the written poem in a time-based performance. Trying to project the energies & movements contained in the text. Tidal Channel however is a band & rather than my flailing about Thursday conducts 100% of the musical operations & everything takes off & gets better!

How did tidal channel with Thursday come about?
We would occasionally work together on 1-off performances & occasional recordings. Thursday would be doing her own project Lauds, I was also in a noise band Farms as well as doing my writing. However, we did a split CD release some years back which worked out well & eventually decided to work together under a bona fide ID.

Could you tell me a little about the creative process involved?
Yeah we don’t call it collaboration but an alliance. We target some of my poems that we think might work as songs. My performance aspect is useful here as it acts as a bit of shortlist process. We then discuss what we think a piece should sound like, I use nebulous vagaries & Thursday sets to applying tangible practical terms. Sometimes we have some songs!

What does a day off involve for you and Thursday two highly busy and creative souls?
There are different kinds of days off. Some days of us 1 will be working & we’ll see each other very briefly. Other days 1 of us will be incapacitated with gross fatigue. However when everything syncs up we like to go strolling about the city, hit up some happy hours or some decent curry houses.  We also catch up & talk what both of us are working on, ideas we have. 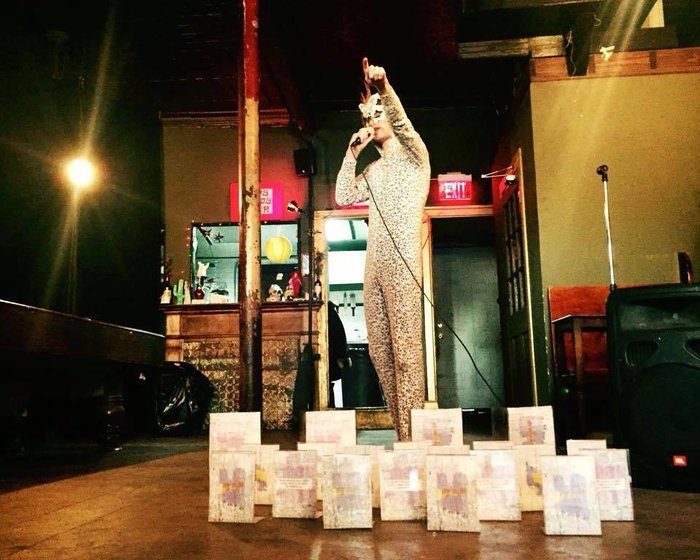 Which poets or poems do you hold dear?
Paul Celan for his clastro-epics. Maggie O’Sullivan for her magic linguistic work
The Language poets, various generations of The New York School.
& at present honorable mentions to CA Conrad, Jane Ormerod,
Xena Semjonova, Todd Colby.

How has residing in New York influenced your creativity?
Artistically I went from dossing in a vacuum to living in a vortex. New York is exhausting just in terms of getting by but always provides the possibility of artistic opportunity & renewal. There’s a lot going on and as a result there’s much experimentation, cross-referencing & less fear of failure because things don’t always have to be perfect and stuff has to get done.

What do you hope to encompass with your poems?
I want to make vigorous contemporary work that’s as good as it can be & pushing to get better. I’m not trying to promote a message, direct a scene or slavishly pay homage to the past. I’m trying to unapologetically fuse something else that’s bright, vibrant & relevant. First & foremost  though, these poems are a celebration of language, no matter how spiky or intangible they seem.
One last question! Why do you think that people should tune into your material?
Because it’s challenging provocative high octane work – the viewing of a post industrial society through a maxed up color correction tool! The material is always severely edited too, a kind of  data pool someone can dip in & out of.. Also because a lot of these poems have a reprieve in different formats, whatever your preferred platform, there’s a problem for you. 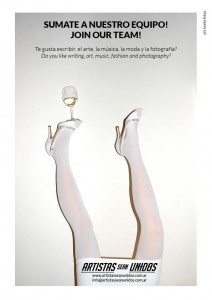