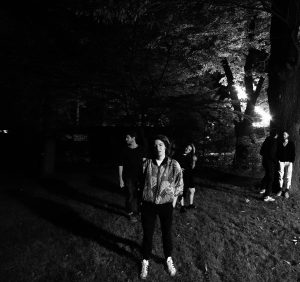 The magical musos, Dice Miller and Enir Da birthed Fith in the abundantly rich, artistic heaven, Berlin  with a ‘vague idea’ of creating a ‘storytelling-soundtrack, with atmospheric dreamscape’ vibes; something that felt like a ‘voice-over soundtrack to a film’. Their songs feel like poems in the cold winds of the Montana mountain ranges .

‘I like to think of Sappho reciting her poems out loud to an attentive congregation of young girls outside a temple in Lesbos.’

Dice, brought her skillful talent and techniques of film making, whilst Enir brought in and experimented with musical production. The idea spiritually, step by step grew from one, to two, then three tracks, into a full length album. A liminal monster had been born.

‘The Debut LP happened quite spontaneously. We recorded almost everything in our bedrooms with the exception of one weekend spent at a friend’s studio..’

Fith, part improvisation, part-theatrical song structures with a cinematic flow, wonderfully woven with words of a luxuriously magical, whimsical and literary magnitude; creatively inspired by the liminal, they are a relaxing, and stimulating experience to behold.

Evolution has occurred and Fith has gone beyond the collaborative duo of Miller and Da to currently holding five /six members, including Lianne Hall, Yr lovely dead moon, Enir Da, Arnaud Mathe, and Charles Lamouroux who all bring in lots of different things to the band. It’s turned into a part- improv, part-theatrical, song structure, with a cinematic flow…

‘FITH and Wanda (the literary/musical co-operative) took off almost at the same time. They both needed each other..’

FITH are affiliated with the newly founded co-operative – Wanda – a musical & literary portal that releases albums and pamphlets. Spread across Berlin/Manchester, Wanda are a group of writers & musicians who forge constellations in between cinematic, literary & sonic spheres. This was of course, a fitting context for FITH and various related projects; a way of forging a scene, a community of like-minded artists.

‘We realised that there was a need for a context which valued literary practices (experimental performance poetry, spoken word, literary concepts and ideas), music, and film, on the same level.’

Fith are currently working on a new album, everyone must prepare tp hear, whilst also enjoying the delights of the radio; Dice, recently did a radio show with Andreas Reihse for Onotesla on NTS, it was a two hour mix beautifully orchestrating soundscapes ideal for the liminal soundboard of Radio.

What is the story of the band, or ‘Wanda’ more to the point, ‘Fith’ and how do each creative outlet relate?

FITH started out in Berlin with Enir Da and myself (Dice Miller), trying out a couple of tracks together. We had a vague idea to create a ‘storytelling-soundtrack’ atmospheric dreamscape, something that felt like a voice-over soundtrack to a film. I brought in my former filmmaking skills and techniques, Enir brought in and experimented with musical production. It grew from (surprisingly) one, to two, then three tracks, into a full length album. FITH right now has gone beyond our duo collaboration and has currently five /six members, including Lianne Hall, Yr lovely dead moon, Enir Da, Arnaud Mathe, and Charles Lamouroux…we bring in lots of different things to the band. It’s turned into a part- improv, part-theatrical, song structure, with a cinematic flow…Then came Wanda, a platform for supporting and releasing music/poetry which slipped in between the cracks of cinema, literature, and sound. This was of course, a fitting context for FITH and various related projects; a way of forging a scene, a community of like-minded artists.

• Dice, your vocals, notably on the track, ‘Oya’ are especially, beautiful. Have ‘you’ always expressed yourself vocally, in such style?

• Do you think that the words to your tracks are lyrics or poems? • How would you describe your music?
That’s an interesting question. I think both. They are lyrics for songs, and they are poems designed for performance, recitation; they have an orality about them which is important for the tracks and live performance. Sometimes I perform them in spoken word mode, with backing vocal chorus tones. Sometimes, I sing with bandmate Rachel (yr lovely dead moon) and we improvise our vocals. I like to think of Sappho reciting her poems out loud to an attentive congregation of young girls outside a temple in Lesbos. I like the idea that our music has many functions, it has a ritualistic mode that features in theatre; it is rhythmic and melodic, but it ultimately brings a lot of very different things together. 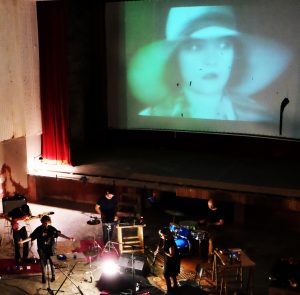 • When do you feel at your most creative?

• Can you explain what influences and inspirations lay behind the band?

Literature, experimental film, feminist histories, and being together as a band in out-of-the ordinary circumstances – we had a chance to spend two weeks at a former cinema in Calabria which overlooked the sea, and we could see Mount Etna in the distance. We had Minoan ruins a footstep away, and a family of Napote dogs to keep us company.

• Could you break me down a list of the equipment you use?

• I have been left wondering what is an ‘egg that holds its own future’?
Ask Angela Carter, I stole that line from her…

• Why did you create a video for the song, ‘Delight’ and what inspired the man on the street concept? I hope you can do the same for ‘Oya’?

That video was made by our friend Tatia Th. She is a great filmmaker, and had free reign with the song. I think she found an interesting route into the track, and came out with the right tone for the video. Oya has a video too:
https://vimeo.com/196340480

• What inspired the moody, ambient-collage, ‘Saints of Cinema’, in collaboration with ‘ONO’?

It was a particularly dark, wintry afternoon in Salford. It was also Ono’s (Michael Holland’s) last day at the Islington Mill. There was an inspiring, bleak quality to the place, and so we made the collage there, in one intensive burst in the studio, while looking out to the panoramic views of Manchester at night. We had some bits of samples to start with: a dialogue/soundtrack from a Peter Weir film, and a spoken word recording that I did about South London and its alternative film histories. That’s how it started.

• Is social media a necessary ‘evil’?

Yes. I’m always on the verge of dropping out.

• What is avant garde in modern times?

I have an ambivalent relationship to the word. At best, it means keeping traditions moving, and cutting and splicing things together in a way which go beyond linear, generic boundaries. At worst it is purist and exclusive.

• In what ways do Manchester/ Berlin inspire the band and how are these two cities similar and dissimilar?

I think this band is determined by, and thrives in these cities. Half of us (myself and Rachel Margetts aka Yr lovely dead moon), have spent time there. As a band we have played there, and somehow the ‘North’ feeds into the sound and atmosphere of FITH.
Berlin has always been a very welcoming home for us too, a place to make things happen. These two cities spiral around each other, and have their own unique, and shared, underground musical histories, we would like to find ways to continue these histories through FITH and Wanda.

• Where did you record the album Fith and why did you choose to work with Alexander Paulick-Thiel?

The Debut LP happened quite spontaneously. We recorded almost everything in our bedrooms with the exception of one weekend spent at a friend’s studio. Then we took the rough mix to Alex, who mixed, and co-produced it. I had previously collaborated with Andreas Reihse from Kreidler, and asked him if he would mix our album, he recommended his band mate, Alex. So it all rolled on from there.

• What is new about your literary & musical co-operative, and marks your art, in such a way and when, or how did you discover this method?

FITH and Wanda (the literary/musical co-operative) took off almost at the same time. They both needed each other. We realised that there was a need for a context which valued literary practices (experimental performance poetry, spoken word, literary concepts and ideas), music, and film, on the same level. It felt like people we knew who were doing interesting and complimentary projects might benefit from this context. Wanda is loose and evolves according to what is happening at the moment. Our concept of the literary also extends to the liner notes. We like the idea of including manifestos, and other literary texts in the musical outlet. This is something that has always existed, but we like to find ways to push this.

• Are you working on any new material now and what other literary performance areas are you keen to apply for your talents?
Yes, we are working on a new FITH album. I like the idea of radio a lot. I recently did a radio show with Andreas Reihse for Onotesla on NTS, it was a 2 hour mix. I love blending spoken word with film soundtracks, and all sorts of things in between. Radio can do that, it’s a liminal space.

Working on the FITH album, and we have a couple of gigs coming up in Berlin and Lithuania. And time to write.

• Is there anything you want to say to your fans?

You mean a lot to us! We have only being doing this for a little while, and it’s quite amazing to realize that fans are your local, extended, and virtual community.

• Promise to come and visit Argentina?

We would love to.